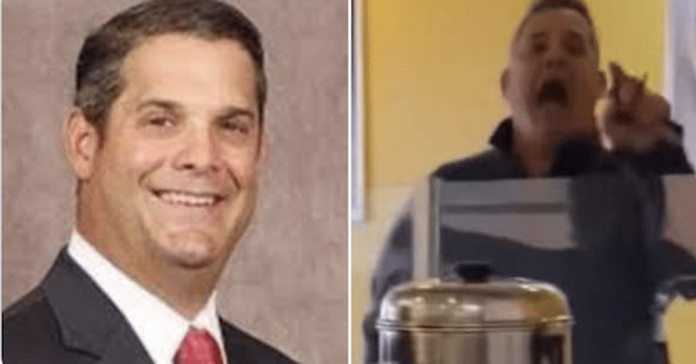 According to reports, the 48-year-old man was reportedly captured on video surveillance going on a racist tirade at a smoothie shop. The outburst included the man throwing a drink at one of the store employees and yelling racial slurs – “You’re f***ing immigrant loser.” The 48-year-old man said he was upset about his son having a severe allergic reaction and he went back to the store as a result.

The 48-year-old man from Connecticut, James Iannazzo, reportedly went to the Robeks smoothie store on Friday afternoon. 30 minutes after leaving the food establishment, he reportedly called 911 to request emergency medical services for his son, who was suffering from an allergic reaction after the drink including peanuts. The child was transported to a local hospital.

Iannazzo, identified as a top wealth manager at Merrill Lynch,returned to the Robeks location roughly an hour after his original visit that afternoon. He was seen on video verbally abusing the four teen workers at the store.

The 48-year-old man demands to know who made his smoothie from over an hour ago, but the employees are not sure who made that specific smoothie. He then proceeds to lash out at the teen workers using profane laden language: “F***ing, stupid f***ing ignorant high school kids. I want to speak to the f***ing manager.”

One of the employees advised him to contact the corporate office to file a complaint. Iannazzo said, “Get the f*** out of here, you f***ing b****!”

As the employees turn their heads away from him, the 48-year-old man throws a drink at the employees, hitting one girl in the shoulder.

Iannazzo then asked for a phone number for the corporate office, but the employee repeatedly tells him to leave the establishment. Iannazzo yelled back: “Shut the f*** up! Stupid f***ing idiot. You’re a f***ing idiot. I want the f***ing number. Shut up. You’re f***ing immigrant loser.”

The 48-year-old wealth manager then tried to access the employees only area, with one of the girls seen pushing back as the banker is unable to open the door.

According to reports, the 48-year-old man then left the scene before police arrived, but later turned himself in to authorities without incident.

He was arrested and charged with second-degree intimidation based on bigotry or bias, second-degree breach of peace and first-degree criminal trespass.

During an interview with investigators, the 48-year-old man reportedly said that “he was upset about his son having a severe allergic reaction and he went back to the store as a result,” according to the police department.

Police officials also said that the employees at the Robeks location reported that Iannazzo never told them about the peanut allergy but had only requested that there be no peanut butter in his drink.

The company Merrill Lynch released the following statement, according to reports.

‘Our company does not tolerate behavior of this kind. We immediately investigated and have taken action. This individual is no longer employed at our firm.

Iannazzo’s lawyer has issued a statement, stating that Mr. Iannazzo wholeheartedly regrets the incident. This incident remains under investigation. This is a developing story and it will be updated as new information become available.

I've identified this man as James Iannazzo of @MerrillLynch being racist and assaulting a minor pic.twitter.com/O8Ic6jyh3p