Man, who was one of the sickest COVID patients at his hospital, says he regrets not getting the vaccine after spending over two months in a coma and life support 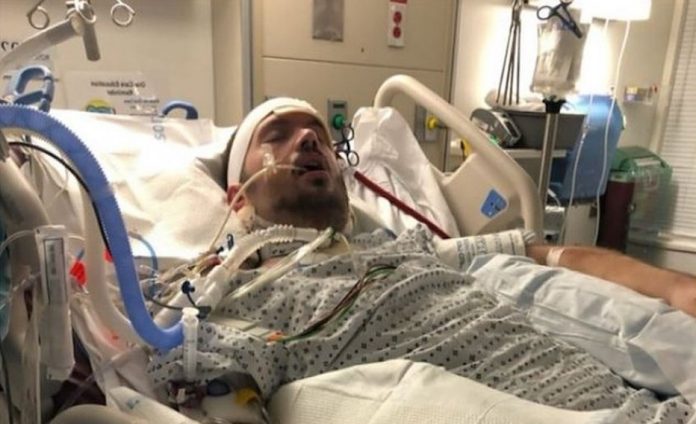 The 36-year-old man, who was reportedly one of the sickest COVID patients at the hospital, says he regrets not getting vaccinated. The man said he went so far into the pandemic without getting sick that he figured he could shrug off getting the vaccine. He had no preexisting conditions and was otherwise healthy.

The 36-year-old man from North Carolina, Steve Rose, said it all started out feeling like just a cold. Unfortunately, he ended up in a coma and on life support.

When he couldn’t breathe, the 36-year-old man went to a local hospital that said they couldn’t help him. He was sent via helicopter to UNC Hospital.

Rose reportedly went into a medically induced coma before Thanksgiving and he just awoke a couple weeks ago.

Steve Rose said: “The last conversation I remember was talking about Thanksgiving dinner, I was looking forward to it.”

According to reports, doctors reportedly put the 36-year-old man on an ECMO machine twice (it supplies oxygen directly to a patient’s blood) because the virus has so badly damaged the lungs that a ventilator simply isn’t enough.

This machine is only available at the nation’s largest medical centers, health officials said.

The 36-year-old man also underwent dialysis twice because he had too much acid in his body fluids.

Rose is now facing months of rehab because he still can’t walk and is just now getting strong enough to sit up.

Rose said that he didn’t get a COVID-19 vaccine and he regrets that now. He said: “I mean, I just want to put it out there that COVID is real and it can kill you.”

According to reports, Rose was among the sickest COVID patients at UNC Hospital. He had no preexisting conditions and was otherwise healthy.

The 36-year-old man also said that the doctors and nurses at UNC did a great job in saving his life. This story will be updated.