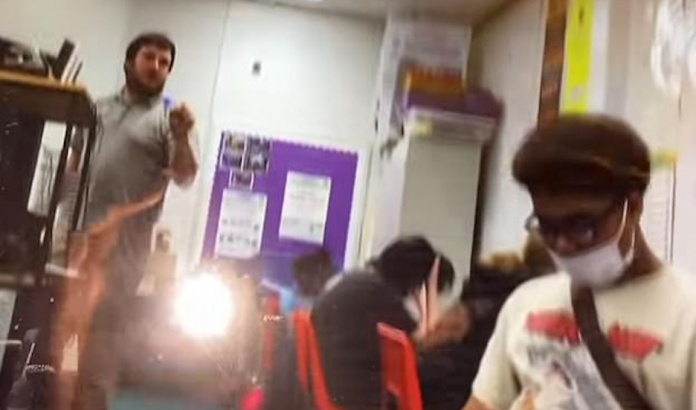 This incident occurred at the Carrithers Middle School in Kentucky.

According to Courier Journal, both of the teachers are white. One of them is male and the other female. They are currently reassigned to bus compounds pending the results of an investigation, JCPS spokesperson Carolyn Callahan reprotedly told WLKY.

According to the statement, the video was reportedly taken around noon March 18.

Cheri Allen told Courier Journal that her child recorded the incident. That same day the school’s principal sent an email about the video.

The video spans just over nine minutes and was recorded by one of the students during the lecture. The students can be seen sitting quietly as the teachers lecture them about their behavior. It remains unclear what prompted the lecture by the two teachers.

Principal Denise Franklin-Williams released the following statement: “It came to our attention that an audio recording has surfaced involving two teachers at our school. Its contents include teachers using inappropriate language and racially insensitive language. We are taking this matter seriously. I want to assure you that we will be reviewing this matter, and we will be following JCPS policies and procedures in that process.”

Per reports, in the video, one of the teachers is reportedly aware they are being recorded, and can be heard saying: “If you’re recording me, I don’t care because I’m tired of it. I get cussed out 40 times a day, I’m tired of this s— too. Like what if you all were us and you had some bad little kids come up to you and say ‘F— you, b—-?’ Or, you get called a n—– or a cracker.”

According to Courier Journal, the female teacher is heard saying she is sick of being told the reason kids are misbehaving is because of COVID.

The female teacher reportedly said: “I’m all for being nice and having fun but when you all starting treating me like s—, it’s going to be the same way. Someone explain to me what would happen if you acted some of the ways your classmates act if they were stopped by the police.

Do you think a cop is going to be like ‘Oh my God, we’ll give you another chance. Honey, just go home to mommy’. No, they’re going to have you down on the ground — no matter your color, so let’s not even use that excuse. I’m getting tired of that too.”

Cheri Allen, the mother of the student that recorded the video, said:

“You don’t get to group my child in with others and talk derogatory or belittle them because your day isn’t going well. You as an educator, you chose this profession, so you need to figure out a better method or use a more professional vocabulary, but you don’t get to introduce my child to inappropriate behavior and vulgarity.”

The mother also said that she was surprised by the teachers’ outburst. She also believes the outburst was caused by one student in the classroom who threw a book.

Cheri Allen also believes that the white teacher “was indirectly calling them N-words because the boy who caused the disruption was a Black child.”

Sarah McIntosh, who represents District 7 on the Board of Education, released the following statement:

“There is certainly no place in JCPS for racism or racist language. I think it’s important to let the process play out because if there is discipline warranted, then it will be applied. I have full faith in that.”

This incident remains under investigation. This is a developing story and it will be updated as new information become avaialble.