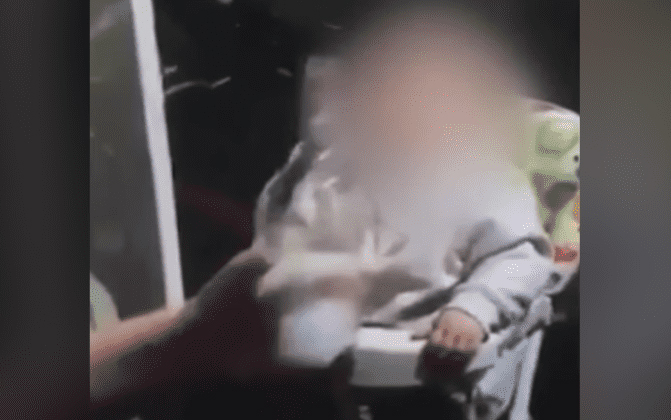 Two women sent the internet in a fit of rage after posting a horrifying video of force-feeding a baby with alcohol. One of the two women was the child’s own mother, who watched and did absolutely nothing when her friend fed the toddler with a drink no child should have. While the video was recorded, the women were at the mother’s house. The 18-month-old baby was sitting in a high chair when the friend took a medium-sized bottle and forcefully fed the baby what appears to be some wine.

The recorded clip showed the woman placing the bottle in the baby girl’s mouth, and the toddler’s head was pushed back so she would consume the alcohol.

The footage then goes on to show the helpless baby reacting to the taste. The distressed child also seems to be crying. A court later heard that the child was “apparently consuming” the substance from the bottle. Along with putting the child in a dangerous situation, the incident also caused “distress to others” after the appalling video was shared on Facebook.

Both the women remained unidentified for legal reasons, and earlier, they were charged with child protection offenses. However, over a year after the incident took place, the two women reportedly pleaded guilty to an amended charge at the ES Court in Scotland.

“You have pled guilty to a charge much different from what you originally faced,” said Sheriff Noble in a recent court session.

“You each pled guilty to a charge of threatening or abusive behaviour essentially involving the creation of a video that appeared to show a child, who was then about 16 months old, drinking alcohol – though there was no suggestion it was alcohol,” Sheriff Noble went on to say. “As a result of that video being created and shared online, a number of members of the public were upset at what they had seen and that is the nature of the charge you have pled guilty to.”

The sheriff also said that the two women left the public “concerned and distressed by what they saw and that is the nature of the charge you have pled guilty to,” as quoted by Daily Record.

In court, the defense agents for both the mother and friend said that their clients had mental health difficulties. Following the court session, both the mother and her friend avoided jail time. The mother was given a sentence of 21 months of supervision under a community payback order. On the other hand, Sheriff Noble said her friend was “the person who administered the drink to the child” and sentenced her to 12 months of supervision. Currently, the child is living with one of the mother’s relatives.