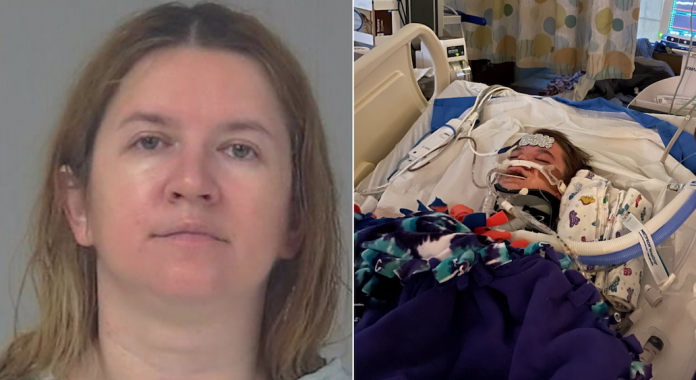 The 41-year-old mother strangled her 8-year-old son to death with her bare hands and then tried to drown her 11-year-old son in a bathtub because she thought that the Russian government was going to take her children and abuse them. After she killed her younger son and tried to drown his older brother, the mother tried to take her own life by stabbing herself in the chest. The mom told prosecutors that she killed her child because she thought her children would be taken away and abused by Vladimir Putin’s regime.

The Russian-born mother told prosecutors that she thought her children would be taken away and abused by Vladimir Putin’s regime.

According to Law & Crime, the 41-year-old mother reportedly strangled her youngest son, Oliver, with her bare hands inside the family’s apartment on March 30.

After she killed her 8-year-old son and tried to drown her 11-year-old son, the mother reportedly attempted to take her own life by overdosing on Tylenol and stabbing herself in the chest.

Natalia’s husband, Jeff, told investigators that his wife was angry that she could not book plane tickets to visit her parents in Russia. She had recently started drinking vodka and experienced surges of rage.

Few days before the fatal incident, the 41-year-old woman reportedly asked her husband to buy survival gear, guns and knives, because she was afraid that their family would be attacked, WBAY2 reports.

On March 30, officers responded to the family’s apartment at 1110 Plank Trail Lane. The victim’s father told the dispatcher that his wife had attacked their son and wanted to kill herself.

The responding officers reportedly found the 8-year-old boy lying unresponsive with bruises around his neck and blood trickling from his nose and right ear.

The boy was taken to the Children’s Hospital where he died on April 1.

Jeff reportedly told investigators that his wife tried to stab him and reportedly stabbed herself in the chest.

Natalia’s 11-year-old son told investigators that his mother had allegedly tried to drown him in the bathtub after challenging him to keep his head submerged underwater as long as he could.

The boy went under the water and felt his mother’s hands on his head, pushing him down and at some point it felt like her whole body was pushing him down. The boy was able to get out from underneath her.

The 11-year-old boy reportedly found his younger sibling strangled under a sheet and alerted their father.

Jeff told prosecutors that he was worried for his wife’s state of mind as she watched the news coverage of the war in Ukraine. The war between Russia and Ukraine amped up his wife more than ever and she started to drink alcohol.

During an interview with investigators, the 41-year-old mom reportedly admitted to suffocating her youngest son to save him from being abused.

The woman also told investigators that she reportedly did not have control of her thoughts. She also said that she was hearing voices and had a brain fog. The woman said she began to have thoughts that the Russian government was going to take her children and abuse them, the Daily Mail reports.

The woman also believed her husband Jeff was reportedly trying to sell her and the boys to the dark web, she she decided to kill her 8-year-old son because he was the youngest and most vulnerable.

The 41-year-old mother told prosecutors that she had no other choice but to kill herself because she said people suspected her of being a Russian spy.

The victim’s uncle, Eric, launched a GoFundMe Page to help Jeff care for his surviving son.

Eric Hitchcock reportedly said: “No one should suffer at the hands of a parent, the person whose job it is to protect a child and keep him from harm. With no history of aggression or abuse, we are left with nothing but questions as to why and how this could happen.

On the absolute worst day of Jeff’s life, he gave four different families their very best days. My brother Jeff has always believed that his son Oliver was destined to do great things. Oliver, in his short life, has absolutely accomplished the extraordinary.

Most of us only get the chance to go through life once. Oliver will live on through his donations and our family will always be proud of Jeff for being able to reach beyond his grief and find the level of kindness in his heart to bring joy to others.”