“My gut feeling was telling me this isn’t just a cold or virus”, Mother claims her young daughter nearly lost her life after doctors dismissed her symptoms as the common cold before she was diagnosed with a life-threatening disease 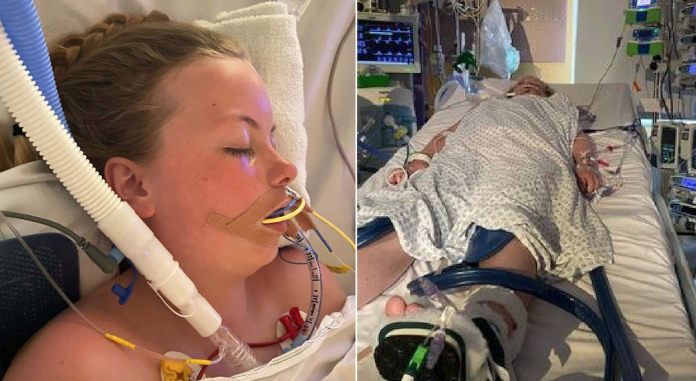 The 13-year-old girl suffered from a runny nose and headache for a week before her temperature increased. Her mom said that she is lucky to be alive after the medical personnel dismissed her symptoms as the common cold before she was diagnosed with a life-threatening disease. “My gut feeling was telling me this isn’t just a cold or virus. I had to push for a blood test and it came back with markers that would indicate an infection but we were discharged.” the mother said.

In June 2021, the then 12-year-old girl, Harri Tuson, was taken to the hospital after suffering from a fever, runny nose and headache for a week.

Unfortunately, the medical personnel at the local hospital told the parents that it was just a cold, despite a blood test indicating the girl’s body was fighting something more severe.

The child’s mother, Toni Tuson, told the Mirror that she had a feeling doctors were wrong. But, the 38-year-old woman took her daughter home after spending eight hours in the emergency department.

Later that night, the child reportedly suffered a seizure and was rushed to hospital again, where scans revealed she had bacterial meningitis and deadly inflammation in her brain.

Harri spent one week in an induced coma and was put on a course of antibiotics. Her mom said that Harri was discharged from hospital three weeks later. Unfortunately, she had to use a wheelchair for two months and relearn how to walk.

The 38-year-old mother said that she is now sharing her daughter’s story to encourage other parents to trust their instincts and raise awareness about the infection.

During an interview with the Daily Mail, the 38-year-old woman reportedly said: “My gut feeling was telling me this isn’t just a cold or virus. I had to push for a blood test and it came back with markers that would indicate an infection but we were discharged.

In hindsight and the benefit of all the research I have since done, I shouldn’t have left. But we were there for eight hours and I was made to feel like a neurotic parent and that nothing was wrong, so I had to trust the doctor’s word and go home.”

At around 2am, she woke up and walked to the bathroom. But, she didn’t return to her room. She was completely out of it and didn’t even know where she was. She was staring right through me and looked brain damaged. One pupil was bigger than the other and I later found out that this was a seizure. I was terrified.”

According to the girl’s mother, a CT scan showed Harri was suffering from a brain infection and hospital doctors immediately gave her antibiotics. An MRI scan revealed she had meningitis, inflammation of the membranes that surround the brain and spinal cord.

According to the Mirror, doctors later told the mother that her daughter also had encephalitis which is a dangerous complication that sees the brain itself became inflamed.

The child’s mother, Toni Tuson, also said: “I was in shock as she didn’t have the symptoms I was familiar with. They said they would do everything possible to protect her brain but prepared us for the worst, saying some people don’t even wake up.

Harri started off with a cold but the sinus infection migrated towards her brain and festered in her sinuses. That is how she ended up with bacterial meningitis.”

The 38-year-old mom also said that on the 6th day in a coma, her daughter started to wake up. Unfortunately, the child was trying to scream but no noise was coming out. The mother thought Harri was brain dead.

The child’s mother, Toni Tuson, also said: “She had no emotions and was unable to form a sentence. But thankfully, every day something more would move like her lips and eyes which gave us a little bit of hope. It took about three days for Harri to switch back on.”

The child spent 3 weeks in a hospital and another 8 weeks to learn how to walk again and rebuild her strength.

Her mom says that she still has balance issues.

Toni Tuson told the Daily Mail: “She shouldn’t have been sent home but thankfully when she arrived back at the hospital in the ambulance the doctors did an amazing job.

She was just let down by the urgent care team in the hospital. Harri is doing super well. We are still in shock that it’s happened.”