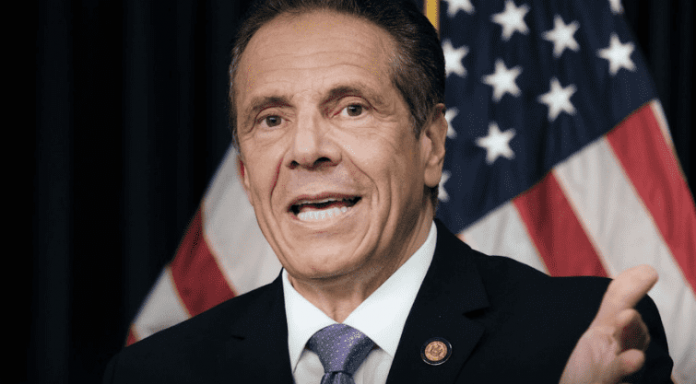 As New York Gov. Cuomo faces a barrage of sexual harassment allegations, he defended himself by putting together a montage of himself kissing and hugging different people to support his argument: “I do it with everyone.” Stirring up quite the storm on social media, Cuomo said he “never touched anyone inappropriately” in the pre-recorded video and denied the allegations against him.

While showing a slideshow of him hugging and kissing different people, Cuomo said, “I actually learned it from my mother and from my father. It is meant to convey warmth, nothing more. Indeed, there are hundreds, if not thousands, of photos of me using the exact same gesture.” The montage also included pictures of him embracing leaders such as former President Bill Clinton and celebrities like Robert De Niro.

“I do it with everyone, Black and white, young and old, straight and LGBTQ, powerful people, friends, strangers, people who I meet on the street,” the governor said.

Many slammed the governor’s unusual response and pointed out that the montage really does not show what Cuomo thinks it shows.

The bombshell allegations against Cuomo include accounts of him repeatedly touching, grabbing, and making inappropriate comments towards women that have worked with him in Albany. It was also alleged that he retaliated against at least one of the women after she opened up about her story.

“Governor Cuomo’s actions violated multiple state and federal laws,” said Attorney General Letitia James’ office. She announced that she began the investigation, which included 179 interviews with people. From Cuomo’s circle, 11 women said they were harassed by him from 2013 to 2020. “This investigation has revealed conduct that corrodes the very fabric that makes our state government and shines a light on injustice present at the highest levels of state government,” James said in a briefing.

James’ report has named some of the women, including Cuomo’s former aides, Lyndsey Boylan and Charlotte Bennett. The women revealed that Cuomo has grabbed or groped their breasts and pressed his hands on different parts of their bodies, such as their legs, stomachs, and backs, on different occasions. In addition to this, he also has allegedly made “sexually suggestive and gender-based” comments.

The report says that the governor would make inappropriate statements and say the woman “looked great for (their) age.” If they weren’t wearing makeup or weren’t dressed a certain way, he would say they were not “ready” for work that day.

While Cuomo continues denying certain allegations, he claims he is “old-fashioned” and has hugged or kissed certain staff members on the lips.

Cuomo also claimed he will be having changes implemented in sexual harassment training for government employees. “I accept responsibility and we are making changes,” he said. “We have to get the job done. I promised you that I would and I will.”