Officers escort 9-year-old boy to school on his first day after his father, a fellow officer, dies 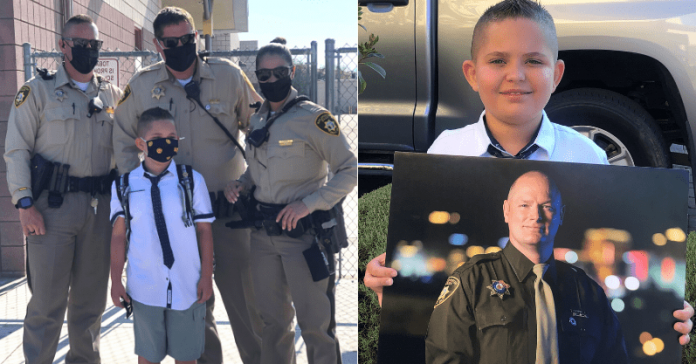 It was the start of a brand new school year for Noah as he was entering the four grade at Steve Shore Elementary School. Sadly, the day was also a reminder that his father, Jason, is no longer around to walk Noah to his class on his big day. So to fill Officer Swanger’s shoes, his colleagues stepped in and escorted the little boy all the way to school.

The officers had arrived in their uniforms just as Noah was preparing to leave home on Monday. These were the same officers who stayed in touch with Noah after Officer Swanger passed away in June from Covid-19 complications. And since this was Noah’s first school year without his father, it meant so much to him to be dropped off by his father’s coworkers.

“He just found out, we surprised him, and he was very surprised. It overwhelms him because he just, he appreciates it, and he just, it’s his, he has a lot of family and we have a lot of friends, but this is his connection to his dad on the police department, so it means a lot to him that they’re all here for him,” said Noah’s mother, Christa.

The boy was extremely close to his father and says he wants to become a police officer just like him when he grows up. After spending the summer break grieving his father’s death, Noah had a big smile on his face as the officers drove him to school.

Taking Noah to school was something special for the LVMPD officers as well. They were happy to do something for the son of their late colleague, who always proved he was a devoted officer during his seven-year service with the police department. “He was known as a devoted father and husband who went the extra mile for people in need and dedicated himself to policing to make a difference in other people’s lives,” said a statement released by the police department at the time of Officer Swanger’s death.