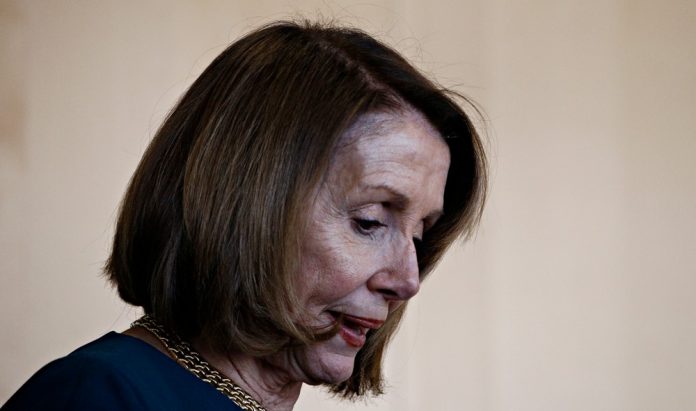 The pressure is mounting on Speaker Pelosi to conduct a real investigation into the origins of COVID-19, independent of the WHO and the Biden administration. On Friday, Rep. Steve Scalise was joined by over 200 Republicans in demanding Pelosi commission the probe, as reported in an exclusive by Fox News.

“We request that you instruct the appropriate Democrat committee chairs to immediately join Republican calls to hold the Chinese Communist Party accountable for its role in causing the global COVID-19 pandemic,” the GOP representatives wrote, adding there “is mounting evidence the pandemic started in a Chinese lab, and the CCP covered it up.”

“If that’s the case, the CCP is responsible for the deaths of almost 600,000 Americans and millions more worldwide,” they added. “These questions about the CCP’s liability are not a diversion, as you falsely claimed.”

“To the contrary, every American family that lost someone deserves answers about the origin of this terrible virus, and House Democrats’ ongoing refusal to allocate investigative resources to get those answers is an affront to them,” the letter said.

The Republicans accused the House Democrats of covering for Communist China in its role obscuring the origins of the virus and delaying the reportage of the pandemic to the world.

“Repeatedly, our requests were ignored,” they wrote, accusing the Dems of “alarmingly shielding the CCP from scrutiny.”

“After more than a year of inaction in light of mounting evidence against the CCP, it raises serious questions as to why House Democrats continue to cover for the CCP’s lies and obfuscation,” they continued.

It was recently revealed that President Joe Biden worked behind the scenes to end a State Department probe into a potential Wuhan lab leak. It is yet more evidence that Biden is in the pocket of Communist China, unlike the case with the Democrats’ false claims about Trump and Russia collusion.

“Joe Biden‘s team shut down a State Department investigation into the Wuhan laboratory as a source of the COVID-19 outbreak, according to a new report on Tuesday night,” the Daily Mail reported.

“Last fall, then-Secretary of State Mike Pompeo lead an investigation to answer whether China’s biological weapons program may have played a role in the pandemic, sources told CNN,” the report continued.

“But the probe was met with internal opposition by those concerned it was part of political effort by the Trump administration to blame China for the virus.”

Donald Trump reacted to the news coming out recently that further substantiates his views that the likely origin of COVID-19 came from the Wuhan lab, which was even funded in part by the NIH.

“Now everybody is agreeing that I was right when I very early on called Wuhan as the source of COVID-19, sometimes referred to as the China Virus,” he said in a statement on Tuesday, “To me it was obvious from the beginning but I was badly criticized, as usual. Now they are all saying ‘He was right.’ Thank you!”

Dr. Anthony Fauci is now facing calls for his resignation for obfuscating in Congressional testimony about the NIH’s funding of Wuhan lab viral projects. Fauci recently admitted that the virus may have come from the Wuhan lab, changing his earlier position that he staked out in testimony.