Parents of a baby girl, who only has months to live, learned they are both carriers of a rare gene defect that caused their daughter’s condition which affects her ability to absorb the nutrients she needs from food 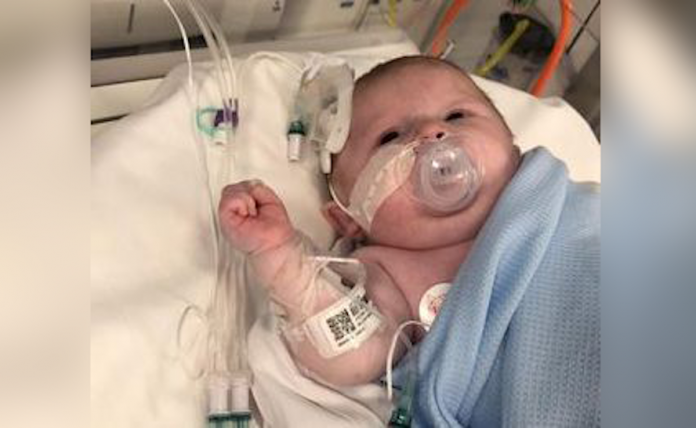 Unfortunately, the 27-year-old mother and the 31-year-old father say their baby daughter has months to live. The 1-year-old child is suffering from a rare condition which was caused by a gene defect both parents carry. The parents knew something was wrong with their child when the baby started to go off her food at six weeks. The baby also started to lose weight, the couple said. The condition was confirmed with genetic testing and the doctors said it affects her ability to absorb the nutrients she needs from food. The condition is so rare it is thought to only occur in one in 79,000,000 people, the doctors said.

According to the Mirror, the doctors told the parents that their 1-year-old daughter had a type of Congenital Disorder of Glycosylation known as ALG-6-CDG, meaning she is unlikely to live past her second birthday.

The couple said that they were both carriers of an extremely rare gene defect. The doctors reportedly told the parents that one in four of their children is likely to be born with the condition.

The 31-year-old father, Steve Wright, told The Mirror: “It was absolutely terrifying. We thought she was going to be discharged but they called us into a meeting room with six specialists, her consultant and a few other doctors.

We knew it wasn’t good news but then they told us it was unlikely she would live past her second birthday and we just went into shock.

They were trying to explain this extremely rare condition to us but we were both blacking out going into a daze. We went through a long phase of feeling guilty like it was our fault she was ill and it was a major concern that any future children we might have could fall ill too.

Doctors were rushing around covering her in wires and tubes all of a sudden and we had no idea what was going on. That was the scariest part, not having the answers. One day Beth called me and told me that Olivia had stopped breathing in her arms.

I ran to the hospital in minutes and by the time I had got there they had resuscitated her but I can’t describe the feeling of terror, it was one of the worst moments of my life.”

According to Olivia’s parents, the child has to be fed intravenously for 14 hours a day, and has an extremely strict list of normal foods she can eat, which are only there to improve her quality of life and let her enjoy taste.

Unfortunately, the 1-year-old girl suffers from fatigue, low muscle tone, which means that she can’t support the weight of her own head.

Beth and Steve told the Mirror that they are on a mission to make her final months as fun and enjoyable as possible. The couple has launched a fundraising page to collect funds to transform their run garden and fill their house with sensory toys.

The 31-year-old dad also said: “We have to try and stay positive for Olivia but some days it is difficult when you can see that she’s frustrated or bored or in pain. Beth is her around the clock carer now and we know that we will never be able to take her abroad.

Her intravenous nutrients need to be connected and disconnected in a completely sterile environment, some of her meds have to be temperature controlled and the whole thing would be just too stressful.

We know this will probably be her only summer with us so we want to make it as special as possible. If it got to Christmas and we lost her and I didn’t know that I had done absolutely everything to make every minute we have with her as perfect as possible, I would never forgive myself.”

The GoFundMe wrote: “I was hoping to raise some money so that we are able to hopefully fix the patio, make the entrance to the garden a bit more push chair / wheelchair accessible, get some specialist play/sensory equipment, additional equipment for her mobility needs and generally improve her quality of life to really give her the best with the time we have.”