Police officers hear mother’s cries and rush to save her choking baby: “They’re my heroes” 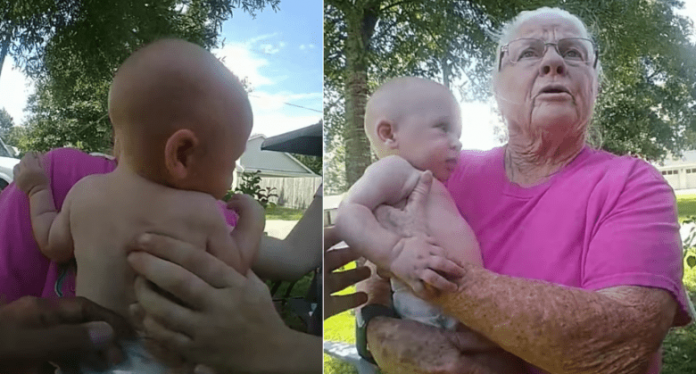 It was an ordinary Monday afternoon when a mother was pushing her 4-month-old baby on a swing in their family yard. Within moments, she completely froze with horror when her little one started choking out of the blue. “She was swinging in her swing. When her mom picked her up to take her out, she just started gasping for air,” said the baby’s great-grandmother, Cathy. Just a few feet away, officers were on duty on the other side of the street.

“Officers Garza and Robertson, our community liaison officers, were tasked with helping employees of The Bridge Over Troubled Waters install a doorbell camera at a crime victim’s home,” the department wrote on Facebook. “…While awaiting the device’s arrival, Officers Garza and Robertson began to hear frantic calls for help and crying from across the street in the 500 block of Shirleen.”

As soon as they heard the mother’s cries, the officers sprung into action and rushed towards the distressed mother, Tawney Johnson. Her daughter, baby Ilianna, was in Tawney’s arms and gasping for air.

“Officer Garza immediately cradled the infant in his right arm, face down, and provided a technique for assisting a choking baby that instantly cleared the blockage,” the police department went on to say.

Within moments, baby Ilianna was fine and seemed to calm down without any issues. “Officer Robertson, noticing that the grandmother had already called EMS, provided an update and directions so that the ambulance could arrive at the location and evaluate the infant,” the department’s post added.

Both Tawney and Cathy were immensely relieved to see Ilianna out of danger. And they are extremely grateful to the officers, who were at the right place at the right time and had the right knowledge on exactly what had to be done.

Great-grandmother, Cathy, revealed that she would have been absolutely devastated if they lost baby Ilianna because she has already had to suffer the loss of three of her grandchildren.

“I lost one that was a year-and-a-week old. One was three days old. One was never born. She passed away before she was born,” Cathy recalled. Baby Ilianna is now the only great-grandchild that Cathy has.

Showing their gratitude to the police officers, Tawney also said, “I don’t know if my daughter would be here without them.”

Although the family still does not know what made Ilianna choke that afternoon, they find themselves even more besotted with their happy and healthy baby.

“I just want [the officers] to know from the bottom of my heart, ‘thank you so much.’ That little girl is my whole wide world,” Tawney said. “Without her, I would be nothing, and they’re my heroes.”

Praised for their efficient efforts, Officers Garza and Robertson were given a pat on their back by the police department, which wrote on Facebook, “This body-cam video is a clear example of the professionalism and dedication that our officers exhibit on a daily basis. Were it not for the quick action of our officer’s situation might have had a different outcome. We want to commend Officers Garza and Roberton on a job well done.”