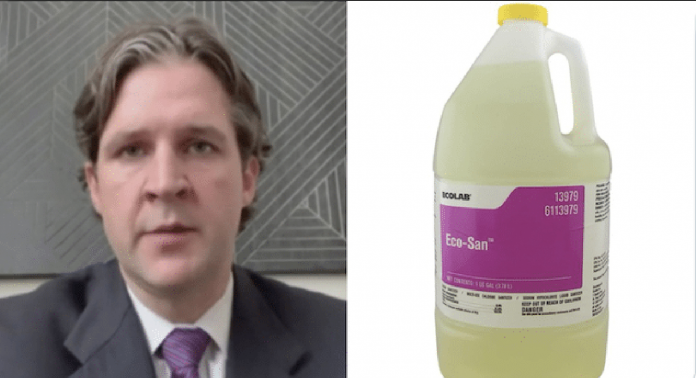 A jury has ordered a famous country-themed restaurant chain to pay a man $4.3 million for serving him a glass filled with a chemical cleaning agent instead of water. The victim is still suffering from symptoms, including injuries to his mouth and esophagus, which have incurred and will continue to incur medical expenses. His attorney accused the restaurant of abusing the court system by denying that its employees did anything wrong.

A Tennessee jury awarded William Cronnon, whose mouth and esophagus were burned during an April 2014 visit to the country-themed restaurant chain Cracker Barrel, $4.3 million in compensatory damages and $5 million in punitive damages on Jan. 6, court records show.

Officials said that Cronnon will receive only about $750,000 due to a state limit on economic damages, his attorney, Thomas Greer, reportedly said.

His attorney also said that this is an unfair law and his client will not receive anything close to what he is entitled to.

The jury reportedly determined that the country-themed restaurant was at fault for serving Cronnon a glass filled with Eco-San sanitizer (a commercial-grade bleach) instead of water during a 2014 lunch visit to the outlet.

His attorney also said that the chemical, which is used to clean kitchen surfaces, had been kept in unmarked pitchers, according to reports.

The victim reportedly suffered serious injuries in the incident, including internal burns that he’s still dealing with nearly 8 years later.

“Cracker Barrel servers regularly used unmarked water pitchers to mix water and Eco-San together, and then soaked parts of the soda machine in that mixture in order to clean them.”

The mix-up landed his client in the ER with injuries to his mouth and esophagus, the attorney reportedly said.

The victim’s lawsuit does not indicate who specifically served him the commercial-grade bleach instead of water. The attorney accused the restaurant of abusing the court system by denying that its employees did anything wrong.

Thomas Greer said: “They will likely appeal this verdict and do everything in their power to avoid paying this man a penny. And I will be prepared to fight for him.”

“Although we are considering our options with respect to this verdict, we are glad this matter is behind us so we can better focus on caring for our guests and employees around the country. Our policy has been, and continues to be, to never put chemicals in any unmarked containers.”

The Tennessee jury returned the verdict after deliberating for roughly 40 minutes. Cronnon is still suffering from symptoms, including injuries to his mouth and esophagus, which have incurred and will continue to incur medical expenses.