Postal worker saves elderly woman’s life after noticing her mail piling up: “I got a little concerned” 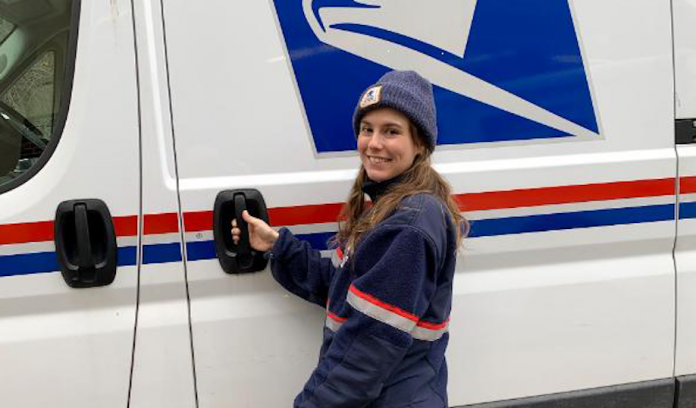 A postal worker in New Hampshire has now been dubbed a local hero after she went out of her way to save a woman’s life. “I hadn’t seen her in a while and I noticed her mail wasn’t getting picked up, so I got a little concerned.” the woman reportedly said.

Kayla Berridge was out delivering mail on January 27 like any other working day when she realized that mail had been piling up for days outside a resident’s home.

“I hadn’t seen her in a while and I noticed her mail wasn’t getting picked up, so I got a little concerned,” Berridge said. The resident, a woman in her 80s, would strike up conversations with the mail lady sometimes and that’s how she knew her. Having not heard from her for a while, a concerned Kayla requested a wellness check to ensure that everything was fine.

Kayla had a gut feeling that things were not okay and she was right. The elderly woman had been trapped on the floor of her bedroom for three days, revealed the Newmarket Police Department. And when detectives arrived on the scene and knocked on the door they heard the woman’s faint cries for help, according to Police Lt. Wayne Stevens.

Stevens had arrived at the house alongside another officer who had visited the woman before and eventually, they were able to enter the premises. Once inside the home, they found the woman lying helplessly on the floor of her bedroom weighed down by items like frames and artwork. Officers suspect that the lady must have tried to grab her bed for support when the items kept on it fell on her and restricted her movement.

She was immediately transported to a hospital where doctors diagnosed her with dehydration and hypothermia. While the woman still remains in the hospital, her family shared that her condition has stabilized and that she is recovering well.

“She might not have been with us had it not been for Kayla,” said her family. Kayla has never had to call for a wellness check before during her four years as a mail carrier.

Noting there have been close calls, Kayla said that she keeps looking for signs like no outgoing mail, mail piling up, or a vehicle parked in the driveways to figure out if there’s anyone in need of assistance.

“Newmarket is a great little town. Everyone has each other’s backs,” she shared. Meanwhile, Stevens revealed that the department has conducted several wellness checks requested by a postal carrier.

However, he noted that there’s rarely been anyone who needed help, one of the cases being that of the elderly lady. Stevens praised Kayla for her keen eye that ended up saving a life. “Without a doubt, she saved this lady’s life,” he said. “That’s part of being a letter carrier in a small town and taking your job to the next level. She did a great job.”