Pregnant woman, who was told by doctors that her baby would be born ‘brain dead’, says she will give birth to her son twice after undergoing a cutting-edge operation to save the baby’s life 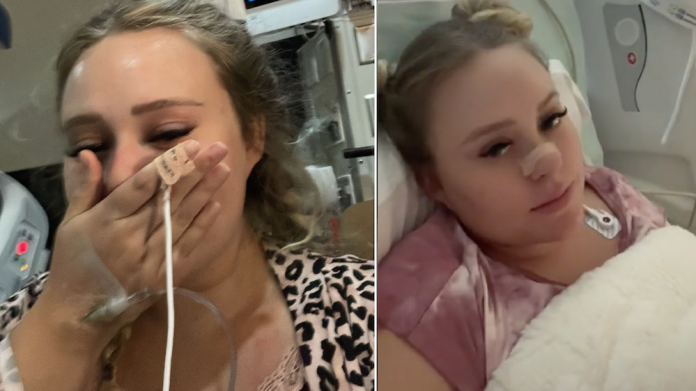 Pregnant woman claims she will reportedly give birth to her baby twice in just 3 months after undergoing a cutting-edge operation to save the baby’s life. Doctors told the woman and her fiancé that their first child would be born “brain dead” and would have no chance at leading a quality life. But, after getting second and third opinions from other specialists, she learned that there was hope for her son. She said that doctors at another hospital agreed to perform a rare operation on the unborn baby. The pregnant woman underwent numerous medical tests to see if she and the baby were deemed well enough for such a procedure.

The 23-year-old woman from Florida, Jaiden Ashlea, told the New York Post that she had a prenatal anatomy scan at 18 weeks pregnant back in March. The scan showed that her unborn son had spina bifida, a defect that affects a fetus’ spinal cord during gestation and is known to lead to learning and developmental disabilities, as well as paralysis.

Unfortunately, the doctors told the pregnant woman to terminate the fetus because it would be born brain dead. But, the 23-year-old woman and her fiancé, Noah Detrick, said that the Winnie Palmer Hospital agreed to perform a rare operation on the unborn baby, the Daily Mail reports.

When Jaiden was 6 months pregnant, she reportedly underwent a 6-hour surgery. She reportedly said that doctors performed a C-section and then made a 2-4 in incision into the uterus through which they repaired the baby’s back.

After the surgery, the lucky woman told the New York Post that she could feel her baby kicking again and twisting his ankles around. Jaiden also said that she plans to deliver her son via C-section in another 10 weeks.

During an interview with The Daily Mail, Dr. Elbabaa, head of fetal surgery at the hospital, said that the operation was not a cure, but raised by half the chance of a child walking normally, and reduced the risk of brain damage. Dr. Elbabaa also said that it was a novel treatment used at the hospital and only offered to the healthiest mother’s and babies. It is yet to be made standard practice, the doctor said.

The young woman also shared her story on her social media account. She posted a video saying she was birthing her baby for him to be put back in and 11 weeks later be born again.

The 23-year-old woman reportedly said: “I was in shock. I couldn’t even speak when the doctor was telling us this. I remember saying to myself, “this isn’t real, this isn’t happening”. It was a nightmare. Since the surgery, doctors have seen so much more movement and signs of any malformation in his brain are reversing. He’s kicking his legs, and twisting his ankles in there,” the mom-to-be gushed. “I can feel him moving.”

According to NYP, the boy likely need to undergo physical therapy from birth until he’s at least 18 years old.

Ashlea was the 31st mother ever to have the surgery at the hospital, one of just 12 medical facilities in the country that perform fetal surgeries. Such procedures typically cost upwards of $25,000, and it was covered by insurance.

According to the health officials, in this medical procedure, surgeons make a C-section in the mother to reach the uterus. After positioning the baby so that its back is facing the uterine wall, they then made a small opening to operate on the baby’s affected area. The umbilical cord is not cut, and at no point is the fetus removed from inside the womb.

Dr. Elbabaa reportedly said: “Children with spina bifida who got fetal surgery in the womb had a lower chance of developing hydrocephaly in the brain or a build up of fluid on the organ, it was cut in half. This is not a cure, all cases will have spina bifida for the rest of their lives. But with the surgery the chances of them walking are better, and the chances of needing brain surgery are much lower.”

Jaiden said that she will be monitored and has been told to ensure she has plenty of bed rest before giving birth by C-section. She often shares updates on her social media accounts. Her latest updated was 2 days ago and she reportedly wrote:

“About 2 months ago what we thought was the end of the world, was simply the start to our families new adventure. Levis diagnoses brought many things into our life, fear being #1. Now here we are, 7 days post op as I recover from open fetal surgery, fear is now nothing but a distant memory. We are simply filled with hope and gratitude! I pray that by sharing our families journey we touch the lives of many and know your child’s SB diagnosis is not a death sentence, but an opportunity to raise a warrior.”