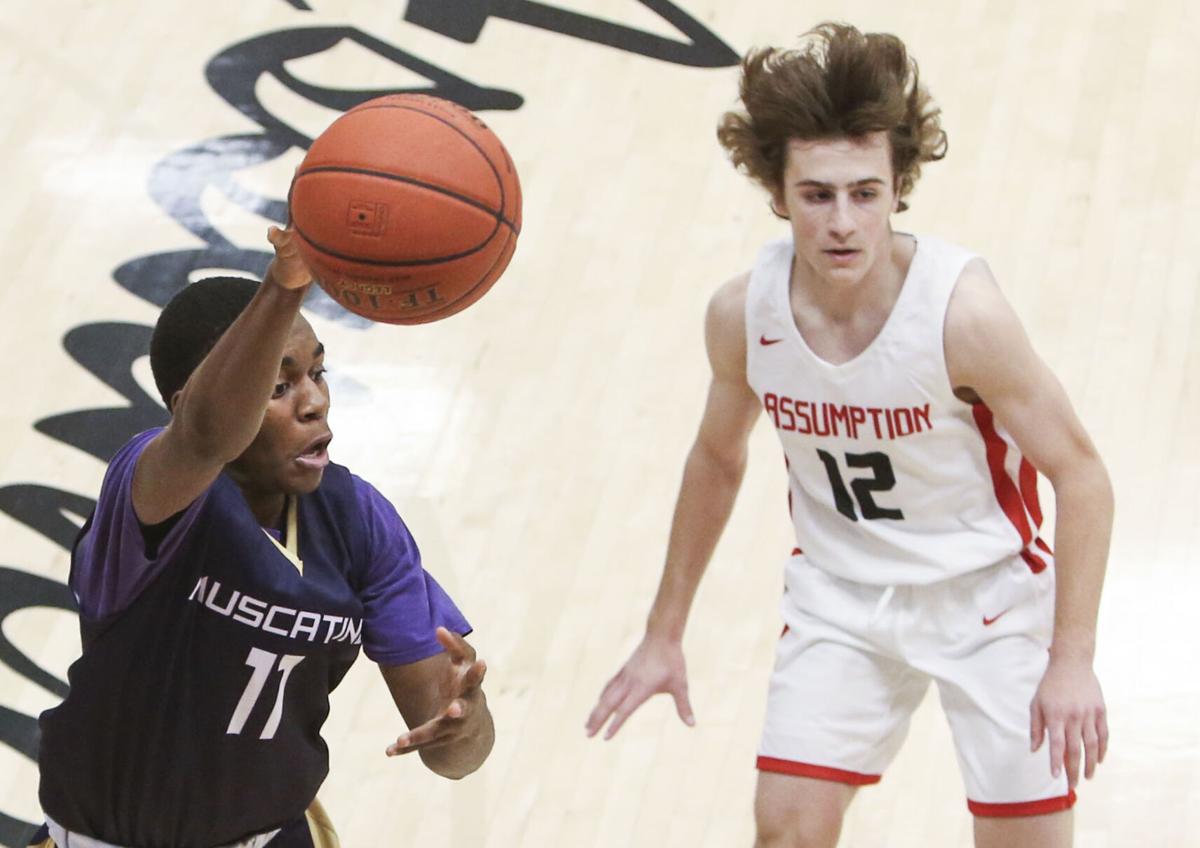 DAVENPORT – The Davenport Assumption boys basketball team has a name for its full-court pressure defense.

It’s called “24.” Muscatine might call it something else after what happened to the Muskies on Tuesday night.

After a lackluster first quarter offensively, the Knights turned up the heat on the visiting Muskies defensively, forcing 10 turnovers in the second quarter which turned into easy points.

It also did not help that the Muskies lost their best ballhandler Noah Yahn to his second foul 40 seconds into the second quarter which forced him to sit. The Knights proceeded to rip off an 11-0 scoring run in the next 120 seconds behind steals from Hodge, Mack and Ellis that gave the hosts an 18-8 lead.

Ellis had a layup and a dunk off the steals while Hodge and Mack also cashed in easy baskets to help Assumption gain control. The defense also helped the offense loosen up as Assumption went on to score 23 points in the quarter and lead 30-20 at halftime.

“We weren’t very happy with our offense in the first quarter and we needed something to get us going, and our defense did it,” Mack said. “I think we brought a lot of energy and hustle and really pressured Muscatine.”

Assumption’s defense most of the game was strong again as the Knights were, for the most part, able to keep the Muscatine guards from getting in the lane. The Knights’ Tyler Maro anchored the back row when someone did get by as he finished with a team-high eight rebounds and added a pair of blocks. But it was the press that kept Muscatine on its heels. The Knights (2-1 overall, 2-0 MAC) forced 24 turnovers for the game and converted that into 18 points, including the 11 points during the key run.

“We executed (the press) much better and filled the spots and sped (Muscatine) up and got some turnovers,” Fitzpatrick said. “But I also liked that we stayed with our offense even when we struggled in that first quarter. Sometimes defense can lead to good offense. We just got better offensively as the game went on.”

Assumption made 10 of its 15 field goal attempts and scored 21 points in the third quarter to grab a 51-39 lead. The Knights kept it going in the fourth quarter behind Hodge, who had eight of his team-high 16 points in the last quarter. Assumption’s lead never dipped below double digits in the second half.

Ellis finished with 15 points, six rebounds and three steals. Mack chipped in 12 points and a pair of steals as well. Owen Hamel came off the bench for Assumption and had four points and four boards. Costello hit a pair of three-pointers and Stratman added six points for the winners as well.

“We just kept playing and we stuck together and we kept taking good shots,” Fiztpatrick said. “Those shots in the first quarter that didn’t go in, started to go down, and that gave us the confidence we needed.”

Muscatine coach John Windham said he liked his team’s effort and added that his team will get better at handling the pressure Assumption brought once they get more practice time and game experience.