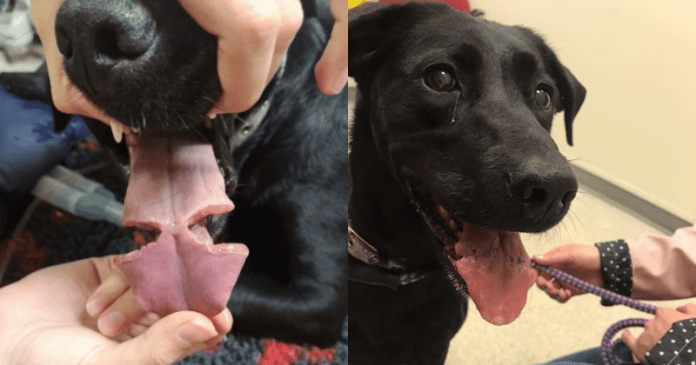 No matter how fun and engaging pet toys may seem, it’s important to ask ourselves one question- is it really safe for my pet? Apparently not as one couple are now warning fellow pet parents about the dangers that “pet-safe” toys pose.

Helen and James Hartley had left their beloved labrador retriever home with toys that were specifically meant for pets. But when they arrived home, they were shocked to find Poppy in a great deal of pain. Her tongue had gotten stuck in the hole of a rubber ball which was her favorite thing to play with. After struggling for some time, her tongue was finally set free from the confines of the hole. But the dog’s troubles did not end there.

After a few moments, the Hartley couple noticed that Poppy was acting quite strangely and thus they rushed her to the Foxhall Veterinary Clinic in Ruskington, Lincolnshire. At the time, Poppy’s tongue was pink and warm to the touch. Nurses noticed that her tongue was swollen and a red line had appeared on either side of her tongue indicating that the ball may have affected the blood flow. After providing her some medications, the veterinarian advised Poppy’s parents to bring her in for daily check-ups. Tragically with every visit, her condition worsened.

Eventually, the red lines on her tongue turned into bruising which began smelling foul due to white plaque formation over the surface. Over the course of a week, it turned necrotic leaving Poppy with two huge slits on either side of her tongue. “Unfortunately, the red line gradually changed into bruising, the bruises then started to smell and formed white plaques on top, which eventually turned black, necrotic, and died off. Poor Poppy was left with two great big slits on either side of her tongue where the ball had been and was struggling to eat and drink because of this, so she was booked in for surgery with Sophie our Vet!” the clinic wrote about the pup’s condition in their Facebook page.

To save her tongue, vets performed emergency surgery to remove the necrotic parts of her tongue and stitched the rest together. Sharing her story to caution other pet owners, the clinic shared pictures of Poppy’s sutured tongue. Although it took some time for Poppy to recover completely and to eat and drink normally, vets and her owners were thankful that the problem was identified before the condition worsened. “We’ve all grown very attached to Poppy here at Foxhall and we will miss her daily visits. Poppy’s owners wanted us to share her story to highlight the dangers of leaving your dog unattended with toys, no matter how innocent they seem,” they shared.

Now that their pet was doing relatively well, Helen thanked the staff at the hospital. “It was really traumatic for us all. Thank you from the bottom of our hearts for looking after Poppy. She’s been so well-loved by everybody at the surgery and we couldn’t have asked for a more dedicated team. Well done to you all, Poppy sends sloppy kisses,” said Helen. Meanwhile, other Facebook users urged the clinic to disclose what kind of toy ended up causing little Poppy such pain.

“After being traumatized by the pictures you have not mentioned what toy caused the damage…?” asked one user. Another shared, “POST. THE. TOY. THAT. DID. THIS…..geez!!! Not a very good post if you’re going to leave THE MOST IMPORTANT part off. Ask the owners, I’m sure they can tell you!!!”