Single father, who suffers from an uncommon genetic condition, received a life-saving transplant after a complete stranger reached out to him and changed his life forever 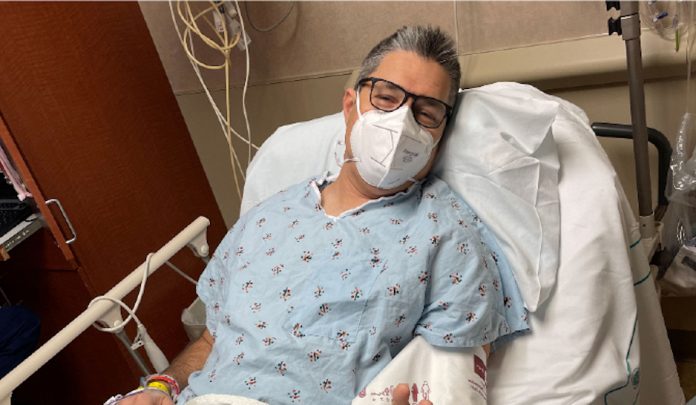 The 46-year-old father of two, who suffers from an uncommon genetic condition, received a life-saving transplant after a complete stranger reached out to him and changed his life forever. The dad knew that the life-saving transplant would give him a second chance at life. When an exhaustive search of friends and family members found no compatible matches, the father found hope in the unlikeliest of places, a complete stranger who worked at a hospital and who was inspired by his story.

Several years ago, the 46-year-old single father from North Carolina, Steve Sanders, learned his kidneys were slowly failing and wasn’t quite sure what his future would hold.

Due to a rare, genetic kidney disease, his decline was slow but certain. It meant Steve would need to make a choice between lifelong dialysis or a donor kidney, per reports.

According to the health officials, dialysis can be devastating and extremely taxing to a person, and it rarely does much more than extend a person’s life span by a few years.

The doctors told the father that as a result of his diagnosis he would either need to find a kidney donor or undergo the laborious process of dialysis in order to continue living.

The 40-year-old stranger, Chris Perez, saw the online campaign and decided to help. He reportedly reached out to donate his kidney, saving the life of Sanders, who is now a close friend of his.

The 46-year-old man described himself as an active father.

Steve Sanders reportedly said: “I didn’t think dialysis would afford me the ability to do the things I’m able to do with my children now. Finding a match for a live kidney meant it would likely last twice as long compared to a cadaver kidney and we would have the benefit of testing the donor beforehand.”

The 46-year-old dad also said that he received support from family and friends throughout his ordeal, and many even offered to be a donor, though none were a good match.

Steve Sanders also said: “I first looked to family, friends and those in my close circle, but they either didn’t qualify or weren’t a match. I knew the process would take time but as time went on, it became more apparent I would need a new kidney soon.”

Unfortunately, the single father couldn’t find a kidney within his inner-circle, so he turned online. Sanders reportedly created a website detailing his situation, and promoted it on social media websites.

The 40-year-old stranger, who serves as director of volunteer services at a hospital, saw Sanders’ story and was inspired.

Chris Perez reportedly said: “My wife saw Steve’s post and brought it to my attention…I read through his story and saw that he, too, had children. It was something about his story as a dad, and I was trying to imagine a situation like that in which I would need help. I didn’t know him but thought let’s give this a try — I would want someone to do this for me.”

Per reports, in January 2022, doctors successfully completed the kidney transplant, and both men were able to go home to recover after a few days.

Dr Kent Kircher, who performed the surgery, said: “The fact that Chris was willing to subject himself to an operation and donate to a stranger…it’s a gift you can’t put a value on.”

Dr. Casingal, chief of the Division of Abdominal Transplant, said: “A living donor is exciting because in the room next door, Dr. Kercher and his team were working on getting the kidney ready. Once it was ready, he handed it off to me to transplant into Steve’s body. The benefit is we shorten the time the kidney was outside of a body, which allows it to work quicker, better, and longer.”

According to the health officials, after a few days in the hospital for post-op care, both Steve and Chris returned home to recover. Thanks to the kindness of a stranger, the 46-year-old dad can look forward to many more years of being active with his children and family.