Teen, who pretended to be pregnant, kidnaps newborn and tells family it’s hers 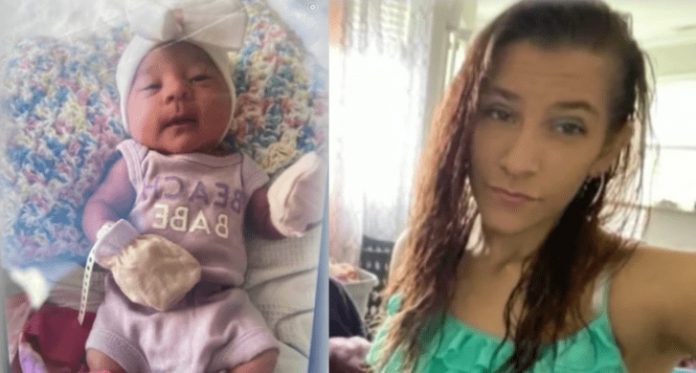 A mother found herself living her worst nightmare last month when a woman who posed to be a fellow mother and friend took off with her infant. The woman, who wished to remain anonymous, said about the moment when a 19-year-old girl drove away with her 4-day-old daughter. “My whole life was in her car,” she shared. “It was horrible. I started praying and all that stuff, and everybody started sharing my daughter’s picture.” The mother had befriended the suspect on social media and had been talking to her for months before she gave birth in August. She believed that the teen was a fellow mother who could understand what she was going through.

“She was giving me advice like a mom you know, so I thought she was a mom. Which, I guess she’s not a mom,” said the mother who has been left disturbed by the turn of events. On Saturday, August 21, Kassidy Lauziere-Cuevass invited the young mom for coffee in a public setting and she readily agreed thinking it was a kind gesture from a friend. “I’ve been tired, I just gave birth, I was like, ‘Oh yeah my friend is going to take me out for some coffee,'” explained the unsuspecting mother. What was supposed to be their first outing together turned out to be the final one.

When they met, the woman noticed that the suspect did not have her child with her. “She said her kid was in daycare when I asked, ‘Where’s the baby?'” she explained. Little did she know at that point that the teen had ill intentions from the get-go.

Next, the mom went into a nearby station to grab the coffee and by the time she returned, Lauziere-Cuevas had already left the place with the newborn in the car, revealed police. Understandably, the woman was left traumatized and in disbelief of what had happened to her. “I just kept saying she took my daughter because I didn’t even know how to process that my daughter was gone,” she shared.

While investigating, police identified the man who left the baby at the restaurant as Daquan Jefferson. The suspect met up with Jefferson, her 23-year-old boyfriend, after taking off with the baby. After reaching out to the suspect’s family, they learned that Lauziere-Cueva had told her family and friends that she was pregnant for months. However, they suspected that she was lying about it.

The suspect’s mother told authorities that her daughter and her boyfriend were sitting in a Subway restaurant. As police closed in, they left the child in the care of a person and fled the scene but were caught shortly after. The two have since been charged with kidnapping and reckless endangerment of a child. The suspect told her boyfriend, she had given birth to her child but their baby was DCF custody and that’s he was forbidden to see it.

Jefferson’s lawyer argued that his client had no hand in the kidnapping and that he was not even aware of it until police began chasing them. “It was only when he was in the Subway restaurant that it became clear to him what Miss Cuevas had done,” the lawyer told a judge.

“At that point, he did not call the police but did the next best thing which was to ensure that the baby was with someone else and would be returned to the police knowing the police were coming.” While proceedings continue, the newborn’s mother is relieved that her daughter was found alive and well. “I feel like everybody stares at me like why she left her daughter,” she said. “She was supposed to be my friend.” The woman hopes that her story serves as a lesson for other mothers.