“The genetic test did not reveal why she developed this kind of condition”, Baby, who was diagnosed with a rare, deadly condition and spent 6 months in a hospital, finally received her life-saving transplant 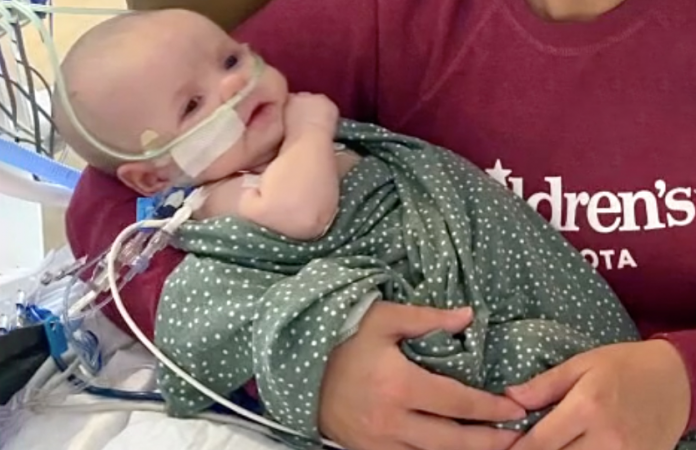 The 8-month-old baby girl, who was born with a rare condition and spent 6 months in a hospital, finally received her life-saving transplant. The child’s parents said that their daughter was diagnosed with a rare heart disease called dilated cardiomyopathy at around 2 months old. “Our pregnancy was normal and we had an uncomplicated delivery and actually went home with her. So she was with us at home for seven weeks and one night, she wouldn’t feed.” the mother said.

The 8-month-old baby girl from Minnesota, Elodie Carmen Baker, received her long-awaited heart transplant on March 27, at The Heart Center at Lurie Children’s Hospital in Illinois.

Unfortunately, the baby was just 2 months old in August of 2021 when she was diagnosed with a rare and complicated heart condition called dilated cardiomyopathy.

It became apparent to medical experts that the only way to remedy the situation was to get her a new heart, something Elodie was forced to wait more than 200 days for.

“Our pregnancy was normal and we had an uncomplicated delivery and actually went home with Elodie,” the baby girl’s mom, Kate Baker, told Good Morning America.

“So she was with us in Minnesota at home for seven weeks and one night, she wouldn’t feed. I was nursing and she let out this cry and my heart just sank and I said to my husband Collin, ‘Something’s wrong. We need to take her in.’”

Baker recalled that doctors at the ER didn’t initially find anything to signal there was something wrong.

“I think they were considering maybe sending us home but they said, ‘Let’s just get an X-ray to be sure,’” Kate explained.

“Then the X-ray came back. They saw her heart was enlarged and that was on Aug. 21. And we haven’t been home since.”

According to the CDC, dilated cardiomyopathy causes children and adult sufferers to have an enlarged heart chamber, which has the potential to leave the muscle unable to pump the necessary blood through the body.

“In Elodie’s case, the genetic test did not reveal an answer for why she developed this kind of cardiomyopathy and in that situation, it’s called idiopathic dilated cardiomyopathy, meaning at this point in time, we don’t really know why this happened to her,” Dr. Anna Joong, who has been caring for Elodie for the last few months, told Good Morning America.

According to mom Kate, Elodie’s heart muscle was really weak.

“It’s expanded over time,” she said. “It hasn’t been able to push the blood out, pump it out to the rest of the body and so it’s dilated, and now hers looks more like a pancake.”

Two months after her diagnosis, Elodie was flown to Lurie Children’s Hospital in Illinois. There, she underwent surgery to have a pediatric ventricular assist device (VAD) placed, which essentially did the job of a heart for her, pumping blood around her body until the right transplant could be found.

“Her heart was so sick, that the IV medicines just weren’t enough and she needed a VAD,” Dr. Joong said.

“We use this device as a way to bridge her to transplant so it’s a way to support her heart, to help get her stronger in the time that she’s waiting for her donor heart.”

Fortunately, on March 27, having waited two years for a new heart, Elodie underwent a successful transplant.

“She will continue to use a (feeding) tube after transplant but after she recovers, will slowly try to decrease the amount of food through the tube to encourage her to be able to meet caloric needs by mouth,” Nora Hammond, a nurse practitioner at Lurie’s, told ABC News.

“The breathing tube was able to come out within hours of coming out of the operating room. Her new heart works beautifully and is really strong,” Dr. Joong continued.

“She is getting routine immunosuppression medications to prevent rejection. She has already been transferred out of ICU level care and is sitting up. She is one strong kid and we are so grateful to the donor family.”