“They abandoned me”: Boy terrified for his life begs an officer for help after being dumped in the desert 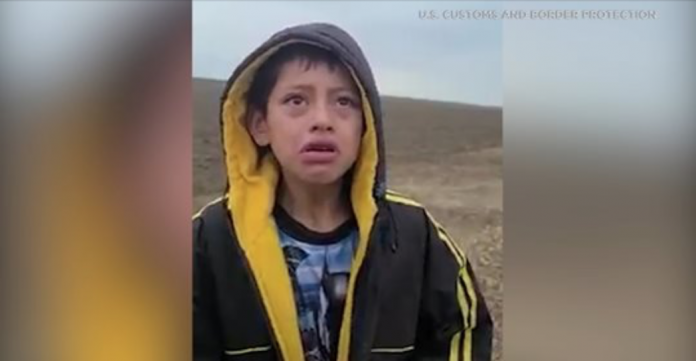 The heart-wrenching footage of a 10-year-old young boy abandoned in a deserted area was shared on social media after the child was seen sobbing and begging for help from an officer. Frightened after being left alone, the boy was spotted with tears streaming down his face by a US Border Patrol officer who was passing by the area. “I came with a group. They dumped me, and I don’t know where they are,” the boy was captured saying in Spanish.

Left behind near the Rio Grande river in Texas, the boy told the agent that while he came with a group, he ended up spending the night hiking through the desert all by himself. The area where he spent the night is also reportedly known for having wild creatures and rattlesnakes crawling around.

The boy wept and said, “They can rob me, kidnap me. I am afraid.”

“It’s that I was coming with a group and they abandoned me and I do not know where they are at,” the boy was quoted telling the agent, who was actually off-duty when he stumbled upon the sight of the boy with no adult around.

“You do not know where they are at? They left you alone?” the agent asked. “They abandoned me,” the young boy said. “I have come here to ask you for help.”

When the child was asked by the officer about whether he was told by someone “to come ask for help,” the helpless boy responded saying: “No, I am coming because if I did not, where am I going to go? Somebody could abduct me, kidnap me. I am scared.”

After the heartbreaking encounter with the US Border Patrol officer that took place on April 1, 2021, near La Grulla, just north of the Texas-Mexico border, the boy was given food to eat and underwent a medical checkup before being transferred to the U.S. Department of Health and Human Services, Office of Refugee Resettlement.

While speaking to Univision, the chief of the Border Patrol in the El Paso sector, Gloria Chavez, said, “To all parents who are considering sending their unaccompanied children to the border, please reconsider that act because it is very dangerous to expose children.”

Officials contacted the boy’s family, and the U.S. Customs and Border Protection confirmed that the footage seen in the video was authentic. “Scenes like these are all too common, as smugglers continue to abandon children in desolate areas, with zero regard for their well-being,” a spokesperson said.