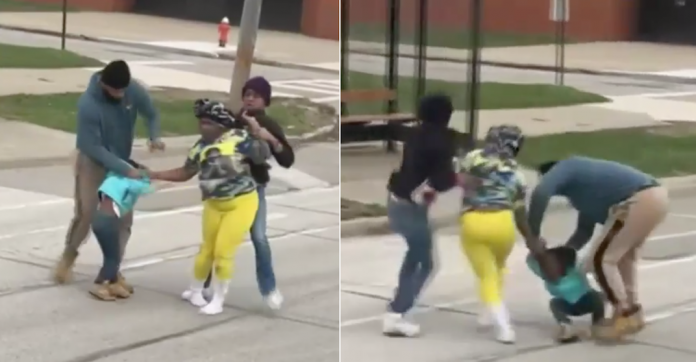 The two men, who are also brothers, were doing their job – delivering beer to gas stations. And all of a sudden, a mother nearly threw her toddler in front of their truck, they said. Thankfully, they reacted quick enough to stop their truck and then got out and intervened.

“Thank god that it was a happy ending instead of a sad ending you know,” Lavell Penson, the driver of the truck said.

Lavell and his brother Anthony Brown were driving in their delivery truck Thursday in Ohio when they came across a mother and her young son in the middle of the street.

“As we driving down we see like a lady almost like at an angle positioning herself like she was about to throw the little boy in front of the truck,” Anthony told WOIO.

Lavell was able to stop just in time and Anthony hoped out and rushed to grab the young boy. Lavell began recording.

“She began to like wrestle with him choke him whatever and I’m like tussling with her and I managed to get him away from her,” Anthony said.

The brothers took the young child to a security guard at a nearby school where they waited until police arrived.

The young boy is currently with his grandmother, and she eventually wants to meet the brothers who saved her grandson’s life.

No more information is available at the time.

As for Lavell and Anthony, they’re both glad they were in the right place at the right time.

“God put me there,” Anthony also said. “I ain’t did nothing special I’m just happy that he put me there and I acted on it. I would want somebody to do the same for my daughter if something like that was going on.”