Tucker Carlson claims Capitol Riot was organized by the FBI, not Trump supporters 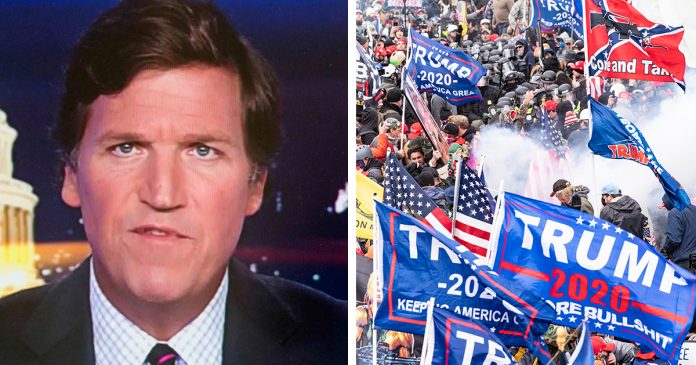 The Fox News news host is never far away from lending his often bizarre and always controversial thoughts to the day’s trending topics, but even his staunchest supporters will have been left scratching their heads after his latest rant. As per reports, Tucker was reflecting over the shocking scenes that unfolded at the Capitol Building back in January, when he claimed that the whole thing was organized by the FBI, not Donald Trump.

Needless to say, the chaos that saw a violent mob storm the Capitol Building in the wake of Trump losing the U.S. presidential election to Joe Biden was world news.

Truly incredible camera shots caught protesters streaming through the doors to the building that stands as one of North America’s figurative pillars of democracy.

The blame can and has been aimed in several directions, but the truth is that the bulk of those who broke into the Capitol Building were disgruntled Trump supporters who had been riled up by Trump himself into believing that the election had been stolen from them.

That, at least, is the most readily accepted narrative. To believe certain right-wing publications in the U.S., the horde were actually ANTI-FA members disguised as Trump supporters to further sow disarray and unrest.

On Tuesday night, he tackled the topic of the January riots – which resulted in the deaths of no less than five people – and expressed his opinion that they had been orchestrated by the FBI to “suppress political dissent”.

We should make it clear from the off – as though you needed us to – that Tucker’s offering lacked any evidence and very little clarity.

“Who did shoot Ashli Babbitt and why don’t we know?” Tucker began. “Are anonymous federal agents now allowed to kill unarmed women who protest the regime? That’s okay now? No, it’s not okay.”

The 52-year-old then alleged that the government is “hiding the identity of many law enforcement officers present at the Capitol on January 6.”

“Strangely, some of the key people who participated on January 6 have not been charged,” he pressed.

“Look at the documents, the government calls those people unindicted coconspirators. What does that mean? Well, it means that potentially every single case they were FBI operatives. Really? In the Capitol on January 6?”

Further down the line of his ramblings, Carlson let it be known beyond doubt that he believes the FBI were involved. After asking a series of rhetorical questions, he said:

“They were all certainly working for the FBI. So FBI operatives were organizing the attack on the Capitol, on Jan. 6, according to government documents!”

To conclude his piece, he said:

“If you empower the government to violate civil liberties in pursuit of a foreign terror organization, it’s just a matter of time before ambitious politicians use those same mechanisms to suppress political dissent. And that is what we are seeing now.”