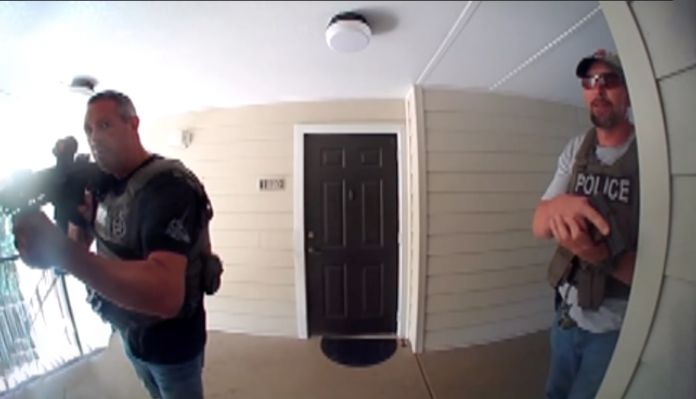 Knocking on the wrong door seldom has any serious consequences, but when several armed US Marshals knocked on a young mother’s front door it left her frightened for her and her baby’s life. “I cracked the door open and they pushed the door open and pushed me and my baby out of the way. They are holding us at gunpoint, screaming, there is a gun about a foot away from her face,” she said.

The incident recently occurred when Cada Staples was home with her 3-month-old in Florida.

She saw on her Ring app there were several armed men at her front door. They told her to come out, and said “we know he’s in there.”

Staples said “hello” through her app, and cracked open her front door, and that’s when the armed US Marshals pushed their way inside.

She believes they were looking for a murder suspect.

“There’s probably 6 or 7 of them out there with guns. 3 or 4 of them run into my apartment and are running around. They are still yelling at me that I’m lying,” she said.

But then she heard a US Marshal who was standing in the hallway question the apartment number.

“Then they ran out and said, that’s the wrong apartment.”

After they left without an apology, Staples contacted the US Marshals Service to ask why they burst into her apartment, the wrong apartment.

She also asked for assistance with her mental health because she had been dealing with anxiety that was brought on by the armed US Marshals.

Staples said the person she spoke to told her to take melatonin and “get over it.”

The suspect the US Marshals were after, Shamar Johnson, was arrested moments later in another apartment on the same floor.

In a statement, the US Marshals Service said “team members did not make entry.” They also said that if Staples did “not made contact with the team through the Ring doorbell, the team would not have had any contact with anyone.”

There was no apology in the statement.