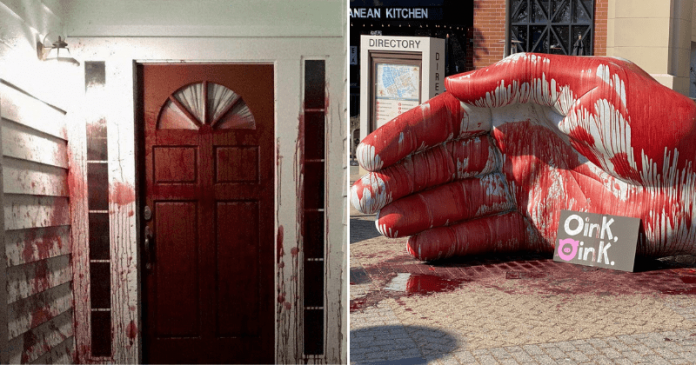 A house and a large hand statue in California were vandalized with pig blood by miscreants. The house targeted was once the home of use-of-force expert Barry Brodd who recently testified in the George Floyd trial in favor of the former police officer, Derek Chauvin. Chauvin was responsible for the death of Floyd, who passed away after the police officer had his knee pressed on his neck for over nine minutes.

Brodd stated that Chavin was justified in the use of brutal force against the Black man who was wrongly accused of paying counterfeit money.

It was stated that a group of people dressed in all black was spotted by the current residents of the house splattering blood on their house. They then threw a decapitated pig head into the porch before running away. “It appears the suspects in this vandalism were targeting Mr. Brodd for his testimony,” the statement read.

“Mr. Brodd has not lived at the residence for a number of years and is no longer a resident of California. Because Mr. Brodd no longer lives in the city of Santa Rosa, it appears the victim was falsely targeted.” This act was considered felony vandalism as the damage to the house amounted to a total of $400.

Forty-five minutes later, a giant sculpture in front of the Santa Rosa Plaza mall was vandalized. A similar substance, thought to be animal blood, was smeared on the sculpture. There was also a sign left by the statue with an outline of a pig and the words “oink oink” written on it. The suspects fleeing from this region matched the description of the ones running away from the house.

The police department also made their position on the brutal force used by Chauvin be known. Santa Rosa Police Chief Rainer Navarro issued a statement following Brodd’s testimony. The statement read: “We are aware of former Santa Rosa Police Officer, Barry Brodd, providing testimony in the Derek Chauvin trial. Mr. Brodd has not been employed by the department since 2004. His comments do not reflect the values and beliefs of the Santa Rosa Police Department.”

Brodd has had a long career in law enforcement, including with the Santa Rosa Police department. He now serves as an expert witness on police procedures and tactics. In his testimony, he said, “I felt that Derek Chauvin was justified and was acting with objective reasonableness, following Minneapolis Police Department policy and current standards of law enforcement in his interactions with Mr. Floyd.”