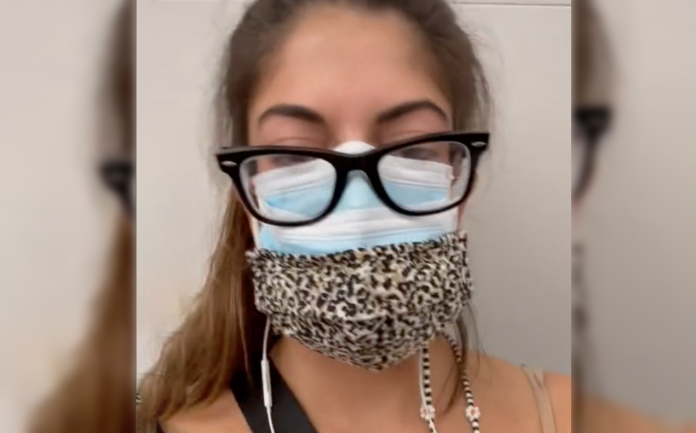 According to the statement, the teacher quarantined herself in the plane’s bathroom for five hours after finding out that she had COVID-19. Her throat began to hurt about halfway through her flight. She had brought some rapid test kits with her in case she needed them while traveling. “I just took my Coronavirus rapid test and I brought it into the bathroom, and within two seconds, the test came back positive,” the woman said.

The woman, Marisa Fotieo, was reportedly traveling to Iceland last week from Illinois. According to reports, her ordeal started somewhere over the Atlantic when she developed a sore throat.

The teacher said that she packed a few rapid tests and took one in the plane’s restroom. She found out she had the virus within seconds. Fotieo then informed a quick-thinking flight attendant, who reportedly told her that there were not enough empty seats on the aircraft to properly isolate her.

The teacher from Michigan was reportedly concerned about the welfare of the other passengers, so she decided to stay in the bathroom for the rest of the flight.

“There was 150 people on the flight, and my biggest fear was giving it to them. I can’t believe I spent four hours in that bathroom, but you’ve got to do what you’ve got to do. It was a crazy experience.” Marisa Fotieo said.

The woman posted a video on TikTok and it has been viewed more than 4.3 million times.

The teacher also said she was able to make it through being cooped up in the bathroom thanks to the care of flight attendant Ragnhildur Eiríksdóttir.

“She made sure I had everything I needed for the next five hours from food to drinks and constantly checked on me assuring me I would be all right,” Fotieo reportedly said.

Over the holidays, Fotieo’ planned a trip to Switzerland with her brother and father. Her father and brother, who were both on the plane, tested negative upon arrival and continued on to Switzerland.

The teacher reportedly stayed back in Reyjavik, where she is quarantining for 10 days, according to reports.

She said she has been comfortable in the Red Cross Humanitarian Hotel where she has been staying and plans to leave in a few days.