“Would I be walking now if they had treated me correctly for that long?” Woman says after 1 year of immobility and excruciating head pain, she sought a second opinion and learned that doctors misdiagnosed her condition 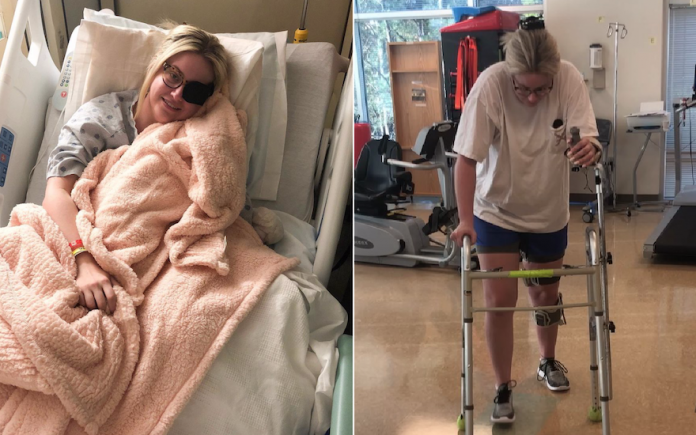 The woman said she suffered stroke at only 29 years old. She said that she clearly remembers not just the symptoms but how she also explained them away. Doctors initially diagnosed her with multiple sclerosis. Unfortunately, it took over a year and a second opinion to discover the the woman never had multiple sclerosis, but was suffering from a spinal fluid leak and multiple strokes. In that time, the woman became paralyzed. “It was very easy to slip to like, ‘would I be fine now? Would I be walking now if they had treated me correctly for that long?’” she reportedly said.

The woman from Georgia, Jordan Plunkett, told INSIDER that in May 2019, she collapsed on her way in from her building’s pool and hit her head on a storm door. But, she and her husband Brad thought she had just overheated and didn’t need to go to the doctor. Headaches were pretty much all day, every day for the young woman. She also said that she was dropping things out of her left hand. Plunkett started having dizzy spells as well.

One month later, her eye started to “look like a squished grape” and her husband took her to the hospital. Plunkett reportedly lost all vision in her left eye and became paralyzed on her left side. Doctors initially diagnosed the woman with multiple sclerosis. But, they didn’t look into the cause of her symptoms further, she said. After 1 year of immobility, Plunkett sought opinion from another specialist and discovered that she didn’t have multiple sclerosis but had suffered a stroke.

During an interview with INSIDER, Jordan Plunkett reportedly said:

“Standing up to your doctor is not an easy thing because you have given them your trust to help and heal you, but if something doesn’t feel right, then chances are, something isn’t. I know what it is like to have the absolute fear of starting over, but at the end of the day, that second opinion saved my life.”

In 2020, she was barely able to move and gained nearly 70 pounds. Plunkett remained in bed with head pain and developed two stomach ulcers. In 2021, she reportedly sought opinion from another neurologist, who took four hours to hear her story, validating that she hadn’t been initially evaluated properly.

The neurologist told her that when she collapsed on her way in from her building’s pool, she reportedly caused a head injury and cerebrospinal fluid leak that exacerbated her stroke risk further. When her husband took her to the hospital, she suffered a stroke.

The woman also told INSIDER that she underwent spinal surgery to plug up the CSF leak, which can be life-threatening and lead to meningitis. Before speaking with the second neurologist, she reportedly went through two months of inpatient care and a month of outpatient treatment, then eight months of occupational and physical therapy.

Now, Plunkett continues to regain her ability to walk, thanks to a device that uses electrical stimulation to activate her leg’s nerves and muscles. She is still working on her recovery and raising awareness.

“It was very easy to slip to like, ‘would I be fine now? Would I be walking now if they had treated me correctly for that long?’ We were terrified when we thought that we had to start over. But it saved my life.” Plunkett reportedly told 11 Alive.